In a world governed by data – numbers in a spreadsheet, graphs and charts, demographics, and thousands of other analytical attempts to define a customer, it seems that we’re getting farther and farther away from understanding that behind these numbers are actually people. Individuals, with unique personalities, wants and desires. The cannabis industry is seeing more ancillary businesses making an attempt to find their data niche in an industry of innovators and originals. They’re trying to use analytics to define the face of cannabis. The problem with that is, cannabis actually has faces, many beautiful faces.

The era of cannabis is one of the most dynamic, and divisive, times in history. Simply uttering the word, “Cannabis,” evokes an emotion in every single individual around the world. There are few plants on this planet that can single handedly conjure emotions from the most base, and degenerate to the most beautiful, and angelic. I suppose we can conclude that cannabis is, in its own way, an emotion, and seeks to define its very own generation.

Merriam-Webster defines “zeitgeist” as, “the general intellectual, moral, and cultural climate of an era.” The faces behind the data, and the voices of the cannabis community boldly answer each of these generational markers. To put it simply, the general intellect of cannabis is one of savvy, informed and independent thinkers, their morals are genuinely altruistic, and the cultural climate is one of unity. In sum, the era of cannabis is not defined by one archaic stereotype, and spans every imaginable demographic – from children with epilepsy to seniors seeking relief, and everyone in between. No matter what walk of life you come from, the cannabis community welcomes you with open arms, sans judgement.

So, who are the faces behind the data? From where does their passion stem? How does such diversity blend into such beautiful unity? Well, I set out to find out.

The stereotypical presumption of the lazy stoner is still very much alive and well in states without legal cannabis, but social media as well as mainstream media have begun to tell a different story. The medicinal benefits of cannabis are widely known, but did you know that there’s a growing population of elderly people seeking out topical salves and other cannabis based remedies to help reduce pain and wean themselves off of the mind and body numbing opiates?

I had an opportunity to sit down with Kurt Junggren, Vice President of Sales and Brand Acquisition for Mindful Dispensaries in Colorado, and spoke with him about the customers they see everyday. 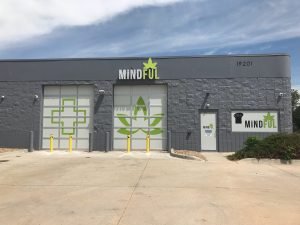 His responses may be different from what you’d think. Of course every recreational dispensary sees customers in their twenties, but Kurt was quick to point out that there is a large population of 30 – 40 year old business professionals finding their way to recreational cannabis, as well. With university studies and a recent report, in February 2018, stating that cannabis outsold alcohol in Aspen, Colorado in 2017, it wouldn’t be a stretch to say that people are looking for an alternative for recreational fun.

But Kurt and I dove a bit deeper. I mentioned my mother, a former marijuana nay-sayer, who has recently found relief from the constant pain of spinal stenosis through high-CBD low-THC therapies. Kurt had an equally compelling story about an 87 year old woman who turned to a cannabis topical remedy for joint pain, and to potentially reduce her need for opiates. Throughout the cannabis industry, we hear stories like this every day.

“Patients get medicine in a cleaner, safer, more enjoyable way,”

Kurt told me as we sat in the newest of Mindful recreational marijuana locations in an eastern suburb of Denver.

He went onto say that mainstream cannabis is providing, “recognition and credibility to the older generations. Making cannabis more acceptable for enjoying, which leads them to try it, and then purchase it.”

Often times, dispensaries see the adult children of the elderly seeking out alternatives for their aging parents. Which helps take the edge off of the stigma, which then leads to the parents shopping for themselves, Junggren said. In his medical dispensaries, the average senior citizens shopping for alternative medicines are in their early sixties. However, Junggren also notes that many seniors struggle with simply having marijuana in their system. “It’s psychological, but they’re slowly coming around.”

I feel it’s necessary to point out that many people who turn to cannabis experience some kind of relief, from daily stress relief to more severe pain relief, to the more widely recognized symptom relief from chemotherapy side effects. The advent of recreational marijuana legalization allows people access to alternatives to pharmaceuticals, without the heavy burden and state red tape of acquiring a Medical Marijuana Card. That said, I feel it is my obligation to say that cannabis isn’t necessarily right for everyone, and if you have certain health concerns, you should definitely consult a physician before working cannabis into your wellness routine. But you can rest assured, that if you decide to explore cannabis for your own personal reasons, you need not be worried about how people will view you as you walk into a dispensary for the first time.

Customers and dispensary staff, alike, are all part of a greater movement. I have found that every cannabis advocate’s passion stems from their personal experience which has been reinforced by a community of diverse and compassionate individuals who are all on a mission –

The Mission: Explore, Educate, and Embrace this plant that provides possibilities for almost every individual, without prejudice.

What is a Terpene?!

NINA COMES TO YOU FROM THE HEART OF CANNABIS-LAND, DENVER, COLORADO. SHE'S A PASSIONATE INDUSTRY PROFESSIONAL, CONSUMER, MARIJUANA ADVOCATE. AND AUTHOR OF "UNICORNS AND DONUTS - THE ART OF CANNABIS SALES."

We gotta ask... Are you 21+? This website requires you to be 21 years of age or older. Please verify your age to view the content, or click "Exit" to leave.