The ABC’s of CBDs and THCs

Before there was research, it was easy to believe in magic and miracles. In the modern world, it’s easy to think that science has an answer for almost everything, but even today the word “miraculous” is still used to define outcomes that science didn’t expect. When research begins in the world of the unexplored, what was once called “magic” becomes law. Since cannabis research is still in its infancy, there is still magic to be decoded.

Scientists anticipate exploring the properties of dozens more cannabinoids (the families of chemicals found in cannabis) in the coming years. Amongst the alphabet soup of cannabinoids, the most popular being THC, there’s another whose popularity is on the rise. “Cannabidiol,” more popularly referred to as CBD, is making headlines. Recently the FDA approval of the drug “Epidiolex,” for two specific types of epilepsy. It is made with hemp-derived CBD. This is a big “win” for the cannabis community, and will hopefully lead to gaining more ground in the cannabis legalization movement.

As we move toward cannabis, and its respective cannabinoids, becoming mainstream, it is important for those who are curious about CBD to understand some basics about cannabis:

Then there’s the complex “Endocannabinoid System.” To date, there are two known cannabinoid receptors – CB1 and CB2. CB1 receptors are in the brain and nervous system, but also found on the skin and in the gut. CB2 receptors are found in an around the body, as well, and although are are most famous for being found on the skin, (the largest organ of the body), scientists like Dorothy “Dot” Colagiovanni, Ph.D., of Next Frontier Biosciences the maker of Verra Wellness cannabis products, are excited to report that researchers are finding a large number of CB2 receptors in the gut. Furthermore, Dr. Colagiovanni stated that THC-A, which is non-psychoactive (THC-A is the acid that is turned into psychoactive THC when heated), has “a lot of potential for gut issues,” as it has anti-inflammatory properties and is better than THC or CBD in those cases. The reality is, stress impacts the Endocannabinoid System, in response, the System releases chemicals to heal both physically and mentally, said Dr. Colagiovanni. Which is why she and Verra Wellness support “microdosing” – introducing small amounts of cannabinoids to enhance wellness of the Endocannabinoid System. Dr. Colagiovanni was happy to share the quote by Dr. Jordan Tishler, “Me, but better,” in support of their mission. 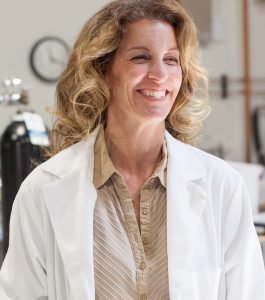 As more research is performed and information made accessible, scientists eagerly await new discoveries in all aspects pertaining to the Endocannabinoid System, and new receptor locations.

Research in cannabis is in its infancy. “We’re only scratching the surface,” said Kelly Barringer, co-founder of Rm3 Labs in Boulder, Colorado, a licensed and ISO (International Standards and Organizations) Accredited testing facility for cannabis products. According to Ian Barringer, Founder of Rm3 Labs, “Research needs access to equipment, patients, and access to the institutional networks to exchange information.” As we await legalization, which will open up these avenues, research is left primarily to private industry and limited budgets. For now, successful medicinal use of CBD and THC has been led by anecdotal stories from patients. Sadly, these reports are dismissed by regulatory bodies and the public is essentially told not to believe them, since research hasn’t been performed. The key word in that last sentence is “hasn’t,” the reality is, Federal regulations won’t “allow” it. This reduces cannabis remedies in America to the age of “snake oil.”

Allow me to provide my personal CBD anecdote. In early 2017, for the first time in my 40 years, I was found to have HPV (Human Papillomavirus) and minor abnormal changes to my cervix. The hope was it wouldn’t progress, because the reality that it would return to normal was possible, though I could tell that it was not necessarily expected. I knew that my immune system had been compromised by a solid three years of stress, and although things were better in my life, I certainly wasn’t stress free. So, I decided to increase my use of CBD. That was the only change I made to my routine, which believe me, teeters between healthy and grossly unhealthy. I continued to use THC, but added doses of CBD every day in some form or another – tincture, isolate, bath bombs. When I returned for my follow up appointment I learned that not only was I HPV negative, my cervix was normal. The following week, I returned to my Medical Marijuana Physician and told him the good news. I was surprised when he said,

“We hear that all the time about cancers, the real news is the latest finding on CBD and Alzheimer’s, Dementia, and MS patients.”

The disclaimer here is that I can’t say that CBD worked its magic on my cells, the regulatory bodies won’t endorse that claim because, once again, studies haven’t been performed to validate it.

With each legal cannabis state having their own rules regarding the sale and packaging of CBD, it is not only difficult for the consumer to understand the quality, it is a heavy burden on cannabis companies who utilize CBD in their products, like Verra Wellness, which is launching in California. According to Dr. Colagiovanni, THC and CBD work synergistically together, but if legality is an issue, CBD alone has modest benefits.

So how do consumers in states with access to CBD products validate quality? The only solution I can come up with is, do your own research. Question your CBD suppliers as to sourcing and testing of products. The more demand for information increases, the greater the chance for private research. In Colorado, Evan Contreras of Rm3 Labs explained that their lab can only test hemp-derived CBD products without THC for companies who are both:

Mr. Contreras did say that hemp-derived CBD products can be tested by a non-licensed facility.

Americans have been inundated with the idea that licensure increases validity, which I’m not necessarily in opposition. Personally, I like standards for things I put in my body. However, in the case of cannabis, we’re navigating a unique market with misinformed and inaccurate national oversight and heavy state regulations. Your best bet in the case of CBD is to do your own research and create the demand for information.

How Cannabis Can Make Your Business Better

NINA COMES TO YOU FROM THE HEART OF CANNABIS-LAND, DENVER, COLORADO. SHE'S A PASSIONATE INDUSTRY PROFESSIONAL, CONSUMER, MARIJUANA ADVOCATE. AND AUTHOR OF "UNICORNS AND DONUTS - THE ART OF CANNABIS SALES."

We gotta ask... Are you 21+? This website requires you to be 21 years of age or older. Please verify your age to view the content, or click "Exit" to leave.